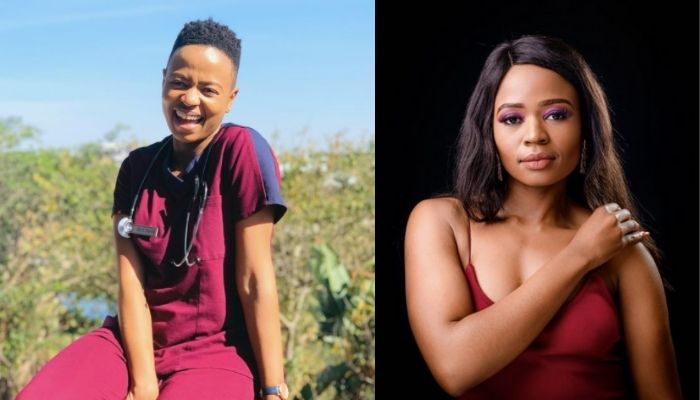 Fanele Ntuli biography, the age she is currently known for acting on Durban Gen as Dr. Thandekile Zondo.

Fanele Ntuli Born on 07 March 1991.She is 30 years of age. She is from Durban. She is a Zulu and English-speaking lady. Fanele is a South African Presenter and YouTuber famous for her role on Uzalo as Mandisa and currently playing Dr. Zondo on the drama series, Durban Gen. Making boss moves, she is taking soapville by storm and wowing viewers every time she shows up.

The actress is never one to shy away from the camera. She takes every opportunity she gets. Look at her amazing pictures of Thee Most popular Doctor on our tv screens.

Fanele Ntuli is a born South African actress and Vlogger. She is from Durban KwaZulu Natal and her date of birth is celebrated on the 9th of March 1991.

She started attending her high school in 2003 at Durban high school. In 2008, she then matriculated from high school. After she matriculated, she applied to study at Oakfield College and that where she obtained her Higher Certificate in Dramatic Studies. She graduated in 2013.

What is Fanele Ntuli’s age?

The 29-year-old actress is only at the beginning of her career but already is reeling in many fans. If it is for the energy she exudes, then we are absolutely here for it.

The same year she graduated in 2013, she then joined to act in Theatres. She appeared in a theatre drama called ‘In love with Shakespeare ‘ in that drama she portrayed a character as Lady Mac Beth. Another theatre drama she participated is ‘The story of Jane Doe as Coco and also a theatre drama Imagine as Michelle a magician.

She acted on Isibaya a Telenovela aired on Mzansi Magic as a schoolgirl and that was in 2015. The following year 2016, she joined Uzalo which aired on SABC 1 every weekday at 20:30. On Uzalo she portrayed a character as Mandisa, and she was well known for that character and was very popular.

In the year 2020, she became part of Durban Gen as Dr. Thandekile Zondo. Durban Gen is aired on etv every weekday at 18:30. Fanele Ntuli is currently acting on Durban Gen as of 2021. She is nailing her character so well as the intern at Durban Gen Hospital. Along side other interns such as Dr Mandla Ngcobo ( Thulane Nkululeko Shange) and Dr Mbali Mthetwa (Nelisiwe Sibiya).

She has a YouTube channel where she shares information about childhood issues. The aim of YouTube is to help heal those childhood traumas and to quit some habits developed during childhood traumas. She described the channel as raw, ugly, truthful, and messy but all will make someone become a real person.

Which TV Roles has Fanele Ntuli taken on?

Her debut role on Uzalo as Mandisa introduces her to soapville and she uses the opportunity to make a lasting impression.

Recently, she bags a role on Durban Gen, playing Dr. Zondo and she is executing it flawlessly. For a minute she has us wondering if she isn’t an actual medical student.