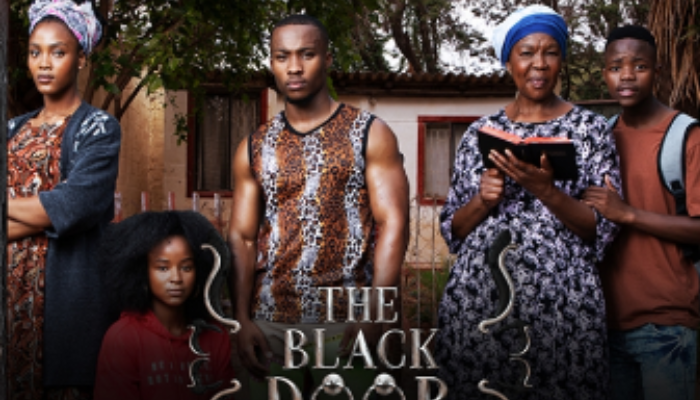 Celebioza soapieteasers brings you The Black Door Teasers September 2022. Feel free to catch up on your favorite South African Drama TV Shows Today SA Tv. Presenting you with the latest news and Tv episodes free online streaming is what we do.

The Soapie Teasers are provided by TVSA. This article was first published by them. This is what will be happening or What’s coming up on The Black Door this September 2022:

Filming began in February 2022, and although the series is based in Mpumalanga, it was filmed on a farm in Honeydew, outside Johannesburg. The entire set was built from scratch in six weeks. Executive director of the series, Mpumelelo Nhlapho, says that they wanted the sets to feel authentic, and open up the world, adding to the cinematic feel of the series, and also making for more playing areas in their style of filming as compared to the traditional style of telenovelas, which are mostly shot in a studio.

Coming up on The Black Door in September 2022:

Rosina overhears Jupiter’s plan to get rid of her. Boniswa is running out of money. Martha finds Nkanyiso who is being held hostage.

Rebs goes on a rampage to find Boniswa. Thenji is the only Sokhulu not overjoyed with Bra Gibb’s marriage proposal to Nomsa. Rosina plots to undercut Jupiter and then confronts him about Enhle’s involvement in the business.

Boniswa convinces the drug dealer to stage a fake kidnapping. Thenji refuses to accept Bra Gibb and Nomsa’s engagement. Ntsako and his runner are beaten up by other dealers

All Fun And Games

The family is horrified and worried sick when they see the kidnapped Boniswa on a video call. Sabelo tries to suss out more information from Khaya. Malume Bulelani beseeches Thenji to accept that Nomsa is about to get married.

Boniswa’s ploy to hoodwink her family turns ugly and puts her life in danger. Thenji comes face to face with a ghost from the past. Jupiter suffers a betrayal from a close associate.

Jupiter is shook to learn that insipho is back on the streets. Zanele confesses to Thenji that Bra Gibb used to rape her when she was young. Boniswa witnesses her mother kill her kidnappers.

Boniswa is back but Nkanyiso is not convinced that she was really kidnapped. Enhle’s plan to rob Rosina goes terribly wrong and Thenji tells Nelly what Bra Gibb did to her. The mastermind behind Boniswa’s kidnapping is revealed.

The Truth or Nothing

Rebs is disappointed when she finds out the truth about Boniswa’s kidnapping. Thenji is close to opening up but Bra Gibb interrupts them. Jupiter is offended when Rosina offers him a small role in the business.

Enhle wants to get back at Rosina for backstabbing them. Thenji tells Nomsa that Bra Gibb raped her. Enhle and Jupiter have sex. Rebs learns that Boniswa orchestrated her own kidnapping.

The Truth Shall Set You Free

Thenji breaks her silence and adamantly confirms that Bra Gibb raped her when she was just 16. Rebs and Nkanyiso feel as if they are losing their grip on Boniswa. Rosina is bust with the drugs at the factory.

When Boniswa takes insipho, the strange vision she once saw returns. Thenji feels like a fraud when Zanele doesn’t show up to corroborate her accusations about Bra Gibb. Enhle and Jupiter panic when Mvubu asks to see them.

A Crime of Passion

Rebs gives in to her carnal desire while Boniswa gets a vivid picture of her mother’s crime. Thenji finds an ally in her son, but he throws a curveball at her. Jupiter and Enhle lie their way out of trouble.

Boniswa shocks Rebs when she reveals she knows the truth about how her father died. Thenji finally tells her family who Velaphi’s father is. Short Gun and Vuvuzela catch Romeo stealing from The Black Door.

Boniswa accuses Rebs of killing Phil, in front of Nkanyiso and Martha. Velaphi suggests a DNA test to prove whether Thenji is telling the truth or not. Vuvuzela and Short Gun decide to blackmail Romeo and he gives in.

Rebs uses Martha to convince Boniswa that Phil died of natural causes. Nomsa is terrified by what the truth will do to her, if Thenji’s allegations about Bra Gibb are true. Vuvuzela and Short Gun turn up the heat on Romeo and don’t realise that he’s dealing with something secretly.

Sabelo introduces himself to Boniswa as her sober companion. Nomsa finally confronts Bra Gibb. Short Gun and Vuvuzela feel bad for Romeo and want to help him.

To Err is Human to Forgive is Divine

Thenji returns home and finds Bra Gibb in her house. Boniswa berates Rebs for pretending to be the sweet caring mom, who got her a sober companion. Romeo walks in on Rebs and Sabelo in a compromised position about to have sex.

Boniswa has a clear flashback of the night Rebs killed Bra Phil and confronts Rebs. Thenji finds it hard to deal with what Bra Gibb did to her and goes to see him in hospital. Romeo finally comes clean to Vuvuzela and Short Gun on the real reason he’s been acting bit off.

Birthed by a Monster

Boniswa reports Rebs to the police for the killings she’s witnessed. The doctor tells Bra Gibb that the poison was untraceable in his system. Feeling guilty for blackmailing Romeo, the guys hatch a plan to help him raise funds for his mother’s bond.

Rebs goes down a dark road to make sure that Boniswa gets off her back, Bra Gibb is embarrassed when his patrons learn about the kind of monster he is and Vuvuzela and Short Gun’s act of kindness backfires.

A Killer by Accident

Rebs’ plan to get rid of Boniswa seems to be successful. Velaphi angrily pushes Bra Gibb to his death. Romeo reaches out to his mother, but she rejects him.

Boniswa regains consciousness and realises where she is. Sabelo steps up to help Khaya clean up Velaphi’s mess. Romeo agrees to move in with Vuvuzela when he’s caught sleeping at The Black Door.

Episodes of The Black door air on e.tv from Mondays to Fridays at 21h30.

Continue Reading
You may also like...
Related Topics:The Black Door