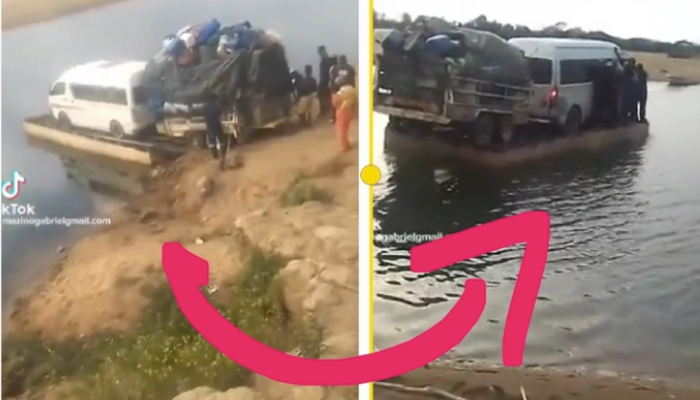 Images and photos of how criminals allegedly smuggle stolen cars out of South Africa into other African countries surfaced on social media and left people, concerned with how crime In Mzansi has come to In time.

High-end vehicles are being targeted and stolen by some criminals in the area, then they are smuggled into neighboring nations like Zimbabwe where fake documents are made before the vehicles are sold.

Syndicates from South Africa have been smuggling vehicles across the Limpopo River, which is typically a very shallow and nearly dry river. The majority of the vehicles will be headed for Malawi, Mozambique, and Tanzania, though some will be destined for the Zimbabwean market.

As a result, Interpol started an operation with the codename “Take Back” that targets stolen vehicles all over the world. The ZRP is one of the countries taking part in the operation.

So far 200 top-of-the-range vehicles, all probably stolen and smuggled into Zimbabwe, have been impounded under a joint operation between the Zimbabwe Republic Police and Interpol targeting vehicles stolen in SADC.

Yet it appears as if criminals are not stopping with the process of smuggling stolen cars into Zimbabwe through the Limpopo River as we can see in the below post.

An individual by the user name ” Commisar Shonny @ Shonny_SA ” felt the need to share this sight with people on social media.

And captioned it ” Do you guys see what foreigners are doing in this country 🙆🏾‍♂️. The videos are of a taxi crossing to Moz and pictures are of cars crossing to Zim ”

Do you guys see what foreigners are doing in this country 🙆🏾‍♂️. The videos are of a taxi crossing to Moz and pictures are of cars crossing to Zim pic.twitter.com/plVwTW8jcu “This is The Reason Why I Stopped Going to Church” People Reacts Amazed After This Pastor Did This
Not Again || Another Child Killed By A Dog In Free-State Today, Dogs Will Be The End Of Many, RIP
To Top